Warning: "continue" targeting switch is equivalent to "break". Did you mean to use "continue 2"? in /homepages/17/d107367334/htdocs/joecopnw/blog/wp-content/themes/suffusion/functions/media.php on line 697
 Growing Up (Part 1) » Joe Cop NW 
Warning: Declaration of Suffusion_MM_Walker::start_el(&$output, $item, $depth, $args) should be compatible with Walker_Nav_Menu::start_el(&$output, $item, $depth = 0, $args = Array, $id = 0) in /homepages/17/d107367334/htdocs/joecopnw/blog/wp-content/themes/suffusion/library/suffusion-walkers.php on line 17

I grew up in a Oregon City where my parents owned a flower shop and raised azaleas. We owned almost an entire city block which had several greenhouses, the business front and our home on it. It was like living on a large farm in the middle of the city. The house was huge, at least from a child’s perspective and there were many places to play, to hide, and to explore.

It was a three story house not including the huge attic which actually had a stair case that went up to it…. so does that make it a four story house?? I had a bedroom on the upstairs floor. The floor plan was kind of strange as I think back on it. You walked up the stairs which was about in the center of the house and at the top you waked into a large open room. This was made into a bed room but most of the time my mom used it to do her sewing and other projects. Straight ahead was my first bedroom and just to the left was another bedroom which was much larger. My ageing grandmother stayed in it for many years and after she died I moved into it.

There were also three large storage areas which I guess were kind of like attics but were on the same floor. One of them had the stair case in it to the top story attic. That storage was a favorite place for me to play. My father had built a door going into it that was quite interesting. It was kind of shaped like a large bank vault door. It was about ten inches thick and the outside was a book case. You couldn’t tell it was a door unless you happened to see the hinges which were visible on the outside. 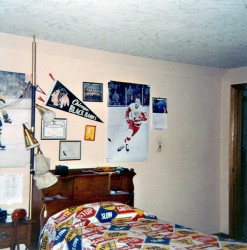 As I said inside was the stair case to the top floor attic. I didn’t like to go up there too much and found it kind of creepy. Lots of cob webs and it only had some planks across the rafters to walk on. I was always afraid of falling through the ceiling. What was great about this area was I had found this hidden little room. There was a small crawl space between one of the bedroom walls and the roof. It probably ran about ten feet then opened up into a small little area. I made it into my little retreat and hiding area. 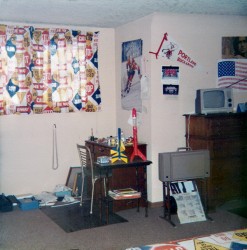 If you look at the photo of my room above you can see the area where my hidden room was just behind the TV.

It’s a wonder I never burned the house down as I used candles for light. Later I was able to connect into the back of an electric outlet and had power for a light. My parents both worked in the family business which was on the same property and even though it was just next door to the house, it was like being home alone most of the time.

Well, that’s about enough for now as I want to save some things to bore you with later. Stay tuned for more…..