Warning: "continue" targeting switch is equivalent to "break". Did you mean to use "continue 2"? in /homepages/17/d107367334/htdocs/joecopnw/blog/wp-content/themes/suffusion/functions/media.php on line 697
 Camping at Candle Creek » Joe Cop NW 
Warning: Declaration of Suffusion_MM_Walker::start_el(&$output, $item, $depth, $args) should be compatible with Walker_Nav_Menu::start_el(&$output, $item, $depth = 0, $args = Array, $id = 0) in /homepages/17/d107367334/htdocs/joecopnw/blog/wp-content/themes/suffusion/library/suffusion-walkers.php on line 17

Rocky and I just got back last Saturday from five great and relaxing days camping on the Metolius river. After I got back from Las Vegas we loaded up the RV and headed out to Candle Creek camp grounds. We actually didn’t stay in the camp grounds but at a site just outside the actual camping area. This is a little camp site I had seen on previous trips up there and it is much nicer than the ones in the camp grounds. 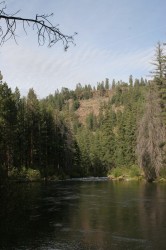 It is more private, larger and has better access to the river and most important it is free. The little access road to get into it is a bit tricky to navigate with my 5th wheel but I managed to get in without any mishaps. I took my new Honda generator and put it to the test. It worked flawlessly and is so much quieter than my other cheep one. The fuel economy was amazing. I think we must have run it about 75 percent of the time we were there and only used about seven gallons of fuel. 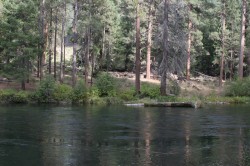 We took Duke of course and we were not there five minutes and he was totally covered with dirt. After about an hour his white fir was so grungy he just looked dull and he didn’t really seem that dirty anymore. His fir is so short and tight that you can just brush off any real thick dirt before he gets into the RV. Duke is turning out to be a very good traveling dog. He rides in the front of the truck and is fairly well behaved. I think he likes traveling.

We didn’t do to much other than lounge around and do some hiking around during the day. Rocky did drive into Sisters one afternoon and I took about a three hour drive around the area on the forest service roads. One afternoon I took Duke for a walk and we tried to cross over Candle Creek on a log. Duke slipped off the log and got stuck so I had to step into the creek to get him off. When I did he knocked me totally into the creek and I got soaked. All I could do was lay there and laugh. It was a bit cold but fortunately we were only about a quarter mile from camp and the sun was out. 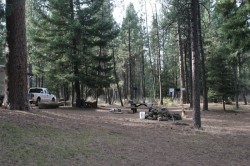 Well it was great fun and I am ready to go again. I am hoping to take the RV over to Central Oregon with some coworkers near the end of October when they go elk hunting. I don’t hunt but it will be a good excuse to go camping again. It should be interesting as they tell me the temperature often dips near zero degrees at night.

One Response to “Camping at Candle Creek”