Warning: "continue" targeting switch is equivalent to "break". Did you mean to use "continue 2"? in /homepages/17/d107367334/htdocs/joecopnw/blog/wp-content/themes/suffusion/functions/media.php on line 697
 Home From the Hunt » Joe Cop NW 
Warning: Declaration of Suffusion_MM_Walker::start_el(&$output, $item, $depth, $args) should be compatible with Walker_Nav_Menu::start_el(&$output, $item, $depth = 0, $args = Array, $id = 0) in /homepages/17/d107367334/htdocs/joecopnw/blog/wp-content/themes/suffusion/library/suffusion-walkers.php on line 17

I got back from my little adventure with my friends Elk Hunting last Friday. I had a great time and the weather for the most part was good. The temperature dropped below freezing most nights but the days were great except for Tuesday. That day it did quickly get cold and even snowed for a bit. I got there on Monday and drove over in a caravan with four other guys. We had three vehicles one with a camper and cargo trailer, one with a truck and trailer and my 5th towed by my trusty F-250. We got on the road at 6am which is what we had planned but then we had some electrical problems with the lights on one of the guys rigs. We finally located the culprit fuse and after fueling up, got on our way. 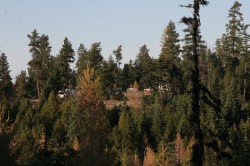 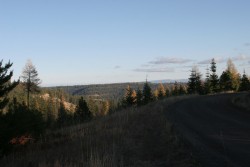 We stopped in The Dalles for breakfast and got to camp a little before noon. The first thing we did after setting up our camps was to go get firewood. As I said in my last post I have never been hunting before and when I go camping a few logs last me all night for a campfire so my friends idea of a fire was a little foreign to me. We collected about six cords of wood and as you can see from the photo the fires we had were a bit large but were sure nice for the cold nights. The other thing I found about these large fires was after we built them about sunset, they burned all night with very little attention.

The season opened on Wednesday and I went out with the hunters. Duston, one of the guys in our group shot an Elk the first hour of the hunt. He named him Larry for some reason unknown to me. During the next few days I went out hunting with them each morning and a couple of time in the afternoon. We saw a lot of elk but no one was able to get a good shot at a legal “spike”, so Larry was the only one taken by our group. Our youngest hunter “AJ” did get a shot off and it is believed he hit the elk. Unfortunately it ran off and didn’t leave a blood trail. We looked for it most of the day but never found him. 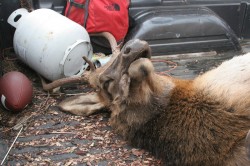 I spent the afternoon on Thursday driving around on the forest service roads of the area. It is some very beautiful country and I may have to go up there camping again sometime. My only complaint is that the roads are very wash boarded and it really bounces you around. When I first got up to camp and checked my 5th I found a lot of things bounced all over inside and a several loose screws. 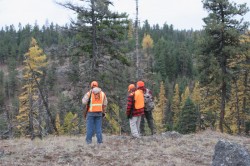 We all sure ate good up there. All of us had generators and one of the guys brought up his Treager Grill and we cooked on it most nights. I have a Treager which is a wood pellet grilling system and it is the best outdoor cooking grill I have ever owned. I don’t much care for cooking on gas or charcoal grills anymore.

I drove back on Friday but most of the guys stayed until Monday as the season closed on Sunday. I’m told they saw many more elk but still didn’t get another spike. 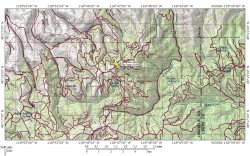