Warning: "continue" targeting switch is equivalent to "break". Did you mean to use "continue 2"? in /homepages/17/d107367334/htdocs/joecopnw/blog/wp-content/themes/suffusion/functions/media.php on line 697
 Lakewood Officers Memorial Service » Joe Cop NW 
Warning: Declaration of Suffusion_MM_Walker::start_el(&$output, $item, $depth, $args) should be compatible with Walker_Nav_Menu::start_el(&$output, $item, $depth = 0, $args = Array, $id = 0) in /homepages/17/d107367334/htdocs/joecopnw/blog/wp-content/themes/suffusion/library/suffusion-walkers.php on line 17

On December 8th I had the great honor of attending the memorial service for the four officers from Lakewood, WA police department. The service was held at the Tacoma Dome and was attended by over 20,000 law enforcement and members of other emergency services.

My day started at 6:00 AM with the drive to McChord AFB arriving at about 0930. The base had been closed to allow for a staging area for all of the police and fire vehicles. It was a steady stream of vehicles arriving and my understanding is that when the number of vehicles reached 2000 they shut it down and turned vehicles away. I think the vehicles were just told to go to the Tacoma Dome. 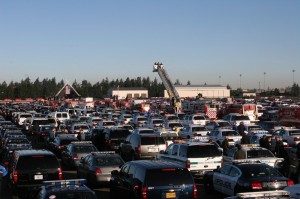 At 10:00 AM vehicles started leaving the staging area in procession to the Tacoma Dome. The 10 mile procession drove past the Lakewood Police Department and limousines picked up members of the officers families.

The original schedule was for the service to begin at 1:00 PM but do to the very large number of vehicles in the procession and length of time it was taking it didn’t get started until 2:00 PM. Even then not all of the vehicles had arrived at the Tacoma Dome. Even with temperatures in the low teens many people lined the procession route to pay their respect.

The service lasted about three hours and my words alone could not describe it. I was very moved by the vast support that was shown for these fallen officers. The Tacoma Dome was at near capacity. The RCMP’s were reported to have sent nearly 1000 officers. There were officer’s from as far away as New York, Boston and Florida. I saw patrol cars from Southern California and Missoula Montana. 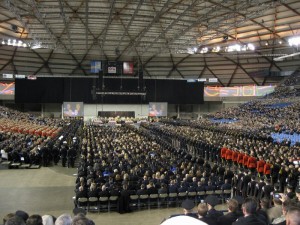 In the Tacoma Dome

The Honor Guard must have numbered around 200 and was the largest I have ever seen. I couldn’t even tell you how many agencies were represented. When the Bagpipe’s played Amazing Grace my eyes teared up. An officer from the Lakewood Police Department sang The Dance by Garth Brooks. Family members talked about their fallen loved ones and there was a touching video depicting each officers life. The service ended with the last radio call for the fallen officers.

Myself and three other officers from my department attended. By the time we got back home it was 9:30 PM. It was a very long day but a memory that will be with me for the rest of my life.

Rest now my fallen brothers and sister. You may be gone but you will never be forgotten.