Warning: "continue" targeting switch is equivalent to "break". Did you mean to use "continue 2"? in /homepages/17/d107367334/htdocs/joecopnw/blog/wp-content/themes/suffusion/functions/media.php on line 697
 Home Sweet Home » Joe Cop NW 
Warning: Declaration of Suffusion_MM_Walker::start_el(&$output, $item, $depth, $args) should be compatible with Walker_Nav_Menu::start_el(&$output, $item, $depth = 0, $args = Array, $id = 0) in /homepages/17/d107367334/htdocs/joecopnw/blog/wp-content/themes/suffusion/library/suffusion-walkers.php on line 17

My partner and I live on about five acres in a rural part of the county. I say about five acres because the property was originally exactly five acres but somewhere in the past the County came in and decided that we didn’t own to the center of the road and they claimed the road was a “private county road”. We had a meeting with the County and they told us that yes, the County owned the road but No they would not improve it or keep it up. That was our responsibility, go figure. 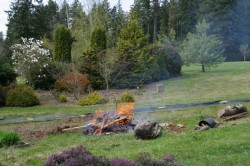 It’s a gravel road and required quit a bit maintenance but between a few of us we seem to keep it up. There has been some talk in the neighborhood about trying to get the County to give the property back to us and we would then have a “private road” but we haven’t taken any action yet.

We have very good neighbors and most of them know we are a couple. They all accept us for who we are and we sometimes party with a couple of them. Our neighbors to the south of us are a Russian family and just great people.
A while back at the end of their Russian Easter observance we happened to just go over to chat for a few minutes. We ended up getting quite blitzed and stayed until way after midnight. They lit a fire and made food on their grill. Jeff (neighbor) brought out a bottle of true Russian vodka (the label was written in all Russian, no English) and we did several straight shots. When we finally went home, I had to almost carry my partner Rocky home. The next day he didn’t remember coming home. I had a weeee bit of a hangover.. I don’t get them very often. 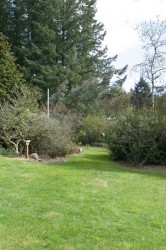 The neighbor that lives across the street from Jeff also came over. His name is Lee and I have known him for many years but not very well. I have always thought him a little strange but this was the first time I had really spent much time around him. He brought over his guitar and he sang and played all night for us. He is very talented and we enjoyed his music.

He and his family are just getting their lives back together after their house burned down last summer. Their furnace started the fire and they lost everything. They have a lot of animals and lost several dogs and cats and birds in the fire. They have a new home on the property now and seem to be doing well.

Back to where we live…. When my dad passed away in March of 2002 I inherited this property. About a third of it is wooded and the rest an open field. My dad was a horticulturist by trade and there are a lot of ornamental trees on the property. Many of them have become overgrown or down right out of control. After his health started declining and he couldn’t keep things up, we tried to take over but it was just too much. After he had retired he was able to work almost full time on it. I just didn’t have the time to keep it up myself.

It took me a couple of years before I started thinking of this place as being mine. It was very hard at first for me to change anything and I just felt like a caretaker of my father’s property. I am over that now and realize it’s mine and he would want me to make it what I want. We have started to thin thing out and change some of the landscape. We have several big projects in the works and I am starting to really get into the home / property owner thing.

A project we have planned for this summer is to build a rock wall in a sloped area and grade another area, moving the earth to back fill behind the wall. We are trying to make a large flat area that I can park and where I can turn the 5th wheel around. Now I have to drive out into the field, which is okay in the dry season but when it’s wet I get stuck in the grass.

Well I guess I have rambled on long enough for now. Thanks for reading…

One Response to “Home Sweet Home”