Warning: "continue" targeting switch is equivalent to "break". Did you mean to use "continue 2"? in /homepages/17/d107367334/htdocs/joecopnw/blog/wp-content/themes/suffusion/functions/media.php on line 697
 RV’n in LaPine » Joe Cop NW 
Warning: Declaration of Suffusion_MM_Walker::start_el(&$output, $item, $depth, $args) should be compatible with Walker_Nav_Menu::start_el(&$output, $item, $depth = 0, $args = Array, $id = 0) in /homepages/17/d107367334/htdocs/joecopnw/blog/wp-content/themes/suffusion/library/suffusion-walkers.php on line 17

I wanted to post this a few days ago but wasn’t able to get connected to the camp hosts Wi-Fi setup. We just got home so I thought I would get this up. More to come.. 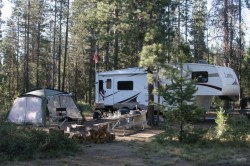 I didn’t think I was going to be able to post before we got back from camping here in LaPine but one of the hosts has satellite internet on Wi-Fi and said I could use it. We came over on the 4th with three other families from work. For the purposes of this blog I will call them the M’s the C’s and the K’s. Their names have been changed to protect the guilty. C’s father also came over and on Friday the I’s came over. All of these families have kids so in total we had 20 people here: eleven adults and nine children. That’s quite a crew.

By now they have all returned to civility and we are here with just the other quite campers and the Chipmunks, but during the time they were here life was very interesting if not somewhat dramatic. Getting a bunch of cops and a fireman together, especially away from the work environment can be very interesting. Both jobs can be quite stressful as you can imagine and when we get in an environment where we can let loose sometimes things get a little weird.

I have know and worked with most of these people for almost twenty years so we are very comfortable together. I don’t know the guy from the fire department very well as I just met him recently. His future wife work for us and was just recently hired so that’s how they became part of the crew.

All of us from the PD had to work on the 4th and so after our shift we drove over together. We didn’t get in until late in the evening so night one was fairly quiet. It was a good drive over with very little traffic. After everyone got set up we all gathered (except the kids) at our place. We had eight people in our RV which is the largest group we have had here yet. Plenty of room though. I think everyone is envious of us as our rig is by far the nicest and most spacious. Sorry, just a little bragging rights here….

The next day was kind of a supply day. I went into Bend with the M’s to shop for food and other supplies and after we got back to camp I went into Sunriver with the officer C to get my bicycle tire repaired and so he could do some shopping. Later that night after dinner (I made a crab salad) we had a fire as well as the K’s. Everyone just kind of floated back and forth between the two camps.

Thursday the everyone kind of split up to do their own things. The C’s and K’s took off on their ATV’s and motorcycle to do some riding. My partner, *C* his dad went into Bend where C’s dad traded in his old boat and bought a new one. I’m not sure what everyone else did but I suspect they went into Bend I went for a little ride on my Honda Shadow. Earlier I repositioned the 5th wheel with the help of C’s wife so I could get the awning extended. There was a tree in the way so I had to angle the RV.

We all had reservations to eat dinner at this place out in the middle of nowhere called the Cowboy Dinner Tree. It is about fifty miles southeast of here near Silver Lake. Our reservations were for 5pm but *C* and his dad didn’t get back from Bend until almost 4pm. We quickly loaded up into three vehicles and after driving just a little over the posted speed limit, arrived at exactly 5pm. 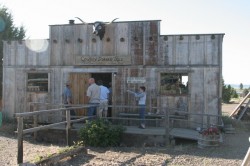 The dinner there was great and the atmosphere very interesting. Dinner consisted of either a whole chicken or a steak which was more like a roast. First they served a salad with choice of ranch or honey mustard dressing. Then these wonderful hot rolls baked in a pie tin. Next they brought out two kinds of what they call soup but was more of a stew. One is a beef stew and the other they call cowboy bean. I had the beef stew but other people said the bean was very good. Finally they brought out the steaks and chicken with a baked potato. By then you are already quit full but I managed to eat a few bites of my steak (the remainder was consumed over the next couple of days). The drive back was much more relaxed and at a reasonable speed.

No camp fire or get togethers after dinner tonight and everyone just kind of went back to their camps and to bed early. We stayed up and watch TV until about midnight. I think everyone was kind of burned out after the drive and large dinner.